Following the recent Air Jaws: Ultimate Breach Off episode we were involved in for Shark Week 2020, we caught up with the leading lady, Alison Towner, to ask her a few questions about Shark Week and current issues facing researchers.

When you were invited to be part of this years Air Jaws, what did you think of the concept of the competition?

"I was absolutely thrilled to be invited onto the Air Jaws shoot this year. The world was on lockdown, and the sheer idea of being able to go out to sea and film white sharks again was so exciting. I felt very privileged.
The competition sounded fun, light hearted and geared towards entertainment, but also achievable filming (content wise), given the restrictions placed on the crew due to Covid 19 protocols (number of people on a boat, no moving locations etc).
I liked the idea of us just capturing iconic breach footage in different ways - something that never gets old, no matter how many times you see white sharks fly!"

How do documentaries like Air Jaws, and others you have been involved in, help with conservation?

"Shark Week in the USA is an absolute machine. This year, around 27 million people tuned into to watch shark programmes on their home screens, which is obviously an incredible opportunity to deliver some much needed conservation messaging.
Every year we see around 40,000 Americans visit South Africa. Many of these tourists come shark diving and tell us they chose South Africa specifically because they saw Shark Week, and wanted to see the sharks in real life. This is not only great for the economy of South Africa (and other countries that Shark Week viewers visit to see/dive with sharks) but also it keeps the sharks worth more alive than dead, in terms of their eco-tourism value."

With funding opportunities for conservation now being less available due to the current pandemic, what can researchers do to help highlight the importance of keeping up conservation efforts?

"With the pandemic, the world has become more connected by platforms like Zoom. This gives researchers the ability to reach people on their laptops all over the planet, on various time zones.
I have taken part in quite a few online courses and lecture series, being able to deliver shark conservation and research, and discuss current issues with large audiences. Education is key, and spreading awareness on the plight of our sharks has never been easier.
Funding for research and conservation has never been harder to get though. Particularly small NGOs are suffering, and I always urge people, if they can do, to support these NGOs by online donations. Even the smallest amount can go a long way to helping the charities stay afloat during these unprecedented times, with borders closed, and budgets cut."

There has been a bit of hype over a lack of women on Shark Week. How is it to be one of only a few women involved in Shark Week?

"I think I was one of five women on Shark Week, versus many male hosts or celebrity guests. The irony is there are so many incredible women in the shark science field.
Here in South Africa its actually more women than men in the field, and I believe the same applies in the US. it is good that the issue was brought up, and I remain hopeful the demographic will start to change. I feel very lucky that Jeff Kurr has regularly invited me to be part of the Air Jaws legacy, and Josh Gates is also really great to work with." 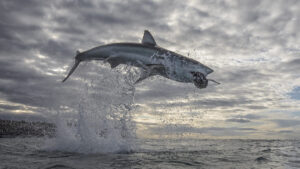 Who do you really think had the best breach on the Air Jaws episode?

"Chris Fallows breach was spectacular, no doubt it was the winning breach. Both Enrico and Chris had slow motion RED cameras filming low angle on their best breaches!
On mine, we had the aerial drone shot, but no RED rolling, so no spectacular slow motion low angle stuff (that really does make the classic beautiful Air Jaws type breach so iconic). I loved the angle we captured. It was so different, and Stefan Van Zyl from Dark Wing Aerials, the pilot, flew that inspire drone like it was an extension of his own arm. Super skilled is an understatement for his capabilities.
As much as I was thrilled with our matrix shot, I couldn’t help but think “dammit, if we had a slow motion RED on that we would have pipped Fallows’ golden sled shot to the post”. The way the shark rotated mid air with the island in the background, was so unique and the colours, background and detail of the shark as it exits the water would have really been heightened by the additional RED footage. I have received lots of messages from people saying they routed for our shot on novelty though!
If the decision was opened to the public, Enrico would have been way up there on the score board for his super enthusiasm and disco lights, he deserved extra points for the little excited dance he did after breaches, perfectly set by his head torch! All in all we had lots fun, and I am so keen for a rematch if the opportunity presents itself again."
Thank you so much for your time Alison. We loved your Matrix breach!